What Katy Did Next was formed in Hull in 1979 by Paul Moller and Mark Fell. 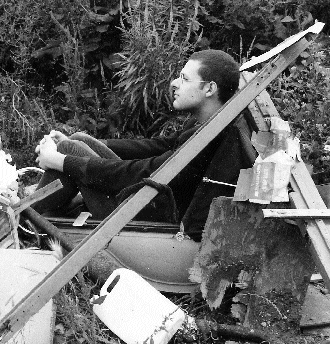 “I formed the group with Mark Fell in late 1979, I distinctly remember asking him what we could call it. We were full of the universe and talking about bands named after books, he came out with ‘What Katy Did Next’ and it was so stupid and incongruous we fell about laughing and it stuck. For years we performed totally improvised music in an experimental jazz/rock, rock/jazz idiom with line-ups ranging from a duo to a sextet with two drummers, we often swapped instruments. Most of the early tapes were stolen or lost. I started writing songs again around 1986 and it became blues and country inspired – We supported the Beautiful South on their first two tours and someone wrote a letter to the music press calling us “the worst group in the world“. Our electronic stuff brought interest from Keith Le Blancs’ Blanc label but nowt happened. A final push as a rock/blues trio disintegrated in 1995. It was always difficult trying to hold it all together and keep going, it often fell apart. Highwire tightrope walking on the edge of chaos. Sometimes trying to fuse it all together was easy and great, sometimes it was hard and horrible. So here we are doing you in the ear with stuff we often could not believe we had played when we listened-back to the tapes. Many get up but few are called.” – Paul Moller